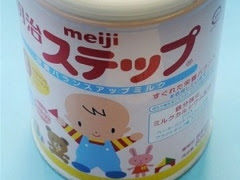 from bloomberg: Radioactive cesium was found in milk powder in Japan made by a Meiji Holdings Co. unit, raising concern that nuclear radiation is contaminating baby food. Meiji the past week found traces of cesium-137 and cesium- 134 in batches of “Meiji Step” made in March, the Tokyo-based company said yesterday. The probe was triggered by a customer complaint last month. Levels in the 850-gram (30-ounce) cans are within safe limits and don’t pose a health risk, Meiji said. The finding highlights the radiation threat to food in Japan nine months after the Fukushima nuclear plant was wrecked by an earthquake and tsunami. Prolonged exposure to radiation in the air, ground and food can damage DNA, causing leukemia and other cancers. While infants are especially susceptible, the contamination may not be a significant threat if limited to small quantities in isolated batches, said Slim Dinsdale, a food safety consultant based in Norwich, England.