from ap: Reaching out to religious voters, Democratic presidential candidate Barack Obama is announcing plans to expand President Bush's program steering federal social service dollars to religious groups and — in a move sure to cause controversy — support some ability to hire and fire based on faith. 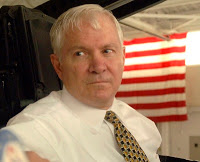 from danger room: This Sunday's Times of London quotes Obama national security advsier and former Navy Secretary Richard Danzig as saying: “My personal position is Gates is a very good secretary of defense and would be an even better one in an Obama administration.” That's quite a statement, from Danzig, a man who could himself "become the next secretary of defense," as NPR recently noted. So I asked him whether the quote was accurate, or had been taken out of context. Nope, Danzig replied. In fact, he had made it about ten days earlier, to the L.A. Times. And he hadn't changed his mind since. So what gives here? How could Obama - who's running to turn the page on the Bush White House's foreign and military portfolio - look to keep that book in Gates' hands? (um, because he's a brzezinski/bilderberg puppet?)

obama seeks expanded civilian role as counter to strained military (aka: national service/universal draft)
from dpa: Democratic presidential candidate Barack Obama called on Americans to engage in more community service on Wednesday as the United States prepared to celebrate its independence, and sharply criticized the current administration for relying on military options... 'The burden of service has fallen almost exclusively onto the backs of our military,' Obama said at a rally in Colorado Springs, Colorado. 'We have got to have a civilian national security force that is just as strong.'

obama criticizes moveon.org in patriotism speech
from the hill: Democratic presidential candidate Barack Obama on Monday, in a major speech on patriotism, criticized MoveOn.org for referring to Gen. David Petraeus as General Betray Us last year... Obama did not vote last year when the Senate approved a measure condemning the controversial Petraeus ad. The Democrat argued that “given the enormous challenges that lie before us, we can no longer afford these sorts of divisions.” MoveOn.org, a powerful left-of-center interest group, endorsed Obama in the Democratic presidential race.

obama is shifting toward the center

from los angeles times: A handgun ban. The death penalty. U.S. wiretaps. Iran and Israel. Trade. On all of those issues, he has recently staked more moderate ground. Barack Obama, as he introduces himself to the broader voting public, is emphasizing centrist - even conservative - positions on hot-button issues. In recent weeks, he toughened his stance on Iran and backed an expansion of the government's wiretapping powers. On Wednesday, he said states should be allowed to execute child rapists. When the Supreme Court the next day struck down the District of Columbia's ban on handguns, he did not complain.

is obama turning out to be just another politician?
from mcclatchy: From the beginning, Barack Obama's special appeal was his vow to remain an idealistic outsider, courageous and optimistic, and never to shift his positions for political expediency, or become captive of the Inside-the-Beltway intelligentsia, or kiss up to special interests and big money donors. In recent weeks, though, Obama has done all those things.

disabuse yr illusion: weighing obama in balance of reality
from chris floyd: For by the choices [Obama] has made in picking advisers to help him shape his policies, he has given every indication that while his presidency might represent a better management and presentation of the current system, it will in no way overturn or even seriously challenge it on any essential point. In other words – and bearing in mind the type of not-insubstantial mitigations noted above – he will keep doing what Bush has been doing, only more competently, less radically, with a greater care for the long-term viability of the power structure. And what is that structure that Obama seeks to refine and extend? It is an imperial system based on militarism and the exaltation of elitist profit and privilege above all other concerns.

from los angeles times: Barack Obama's campaign has shelved the quasi-presidential seal that it unveiled just Friday. Critics called the design a sign of bad judgment and arrogance. It echoed the official presidential seal, with a Latin version of his "Yes, we can" motto replacing "E pluribus unum" and his rising-sun campaign logo replacing the bald eagle's Stars and Stripes shield. It was on Obama's lectern when he spoke at a Democratic governors meeting. The GOP chided him, and national news organizations pounced on the story. "There are no other plans in place for the seal," said Obama spokesman Hari Sevugan. "It was used for that one event."