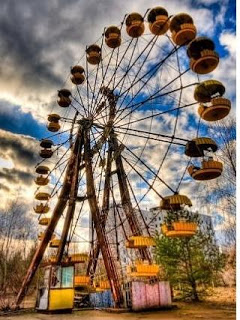 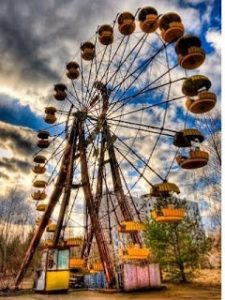 On 25th anniversary of the Chernobyl nuclear disaster, an amusement park stands nearby in abandoned Prypiat, Ukraine as a monument to unrealized dreams. The park was scheduled to open May 1, 1986--five days too late--and no one ever got a chance to ride the ferris wheel (pictured). Prypiat, a new city built in 1970 especially for the Soviet Union's nuclear power industry, remains a radioactive ghost town, today.

The unfolding Fukushima disaster raises important questions. A talking head like Professor Christopher Busby, informs us a fissioning reactor cannot be sealed like Chernobyl. Busby still compliments a rapid Russian response in comparison to a weak one in Japan. Col-Gen. Nikolai Antoshkin involved in the 1986 cleanup, as reported by The Telegraph, believes, "Soviet efforts to contain the Chernobyl nuclear disaster a quarter of a century ago were far better than Japan's 'slow-motion' response to the disaster at Fukushima.."

The present writer believes the courage and intelligence is clearly present to respond effectively at Fukushima. The sad reality is a reaction similar to Antoshkin's, "...said he was shocked at how poorly Japan had coped with its own nuclear disaster". Everyone should be asking what containment efforts can be implemented? There are other ways to effect a measure of containment even if a shroud of concrete to cover a fissioning reactor isn't possible. The world should be shouting--do something!