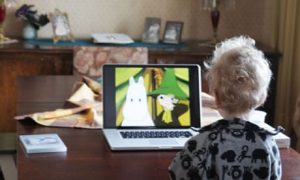 from cryptogon.com: Via: Guardian: Doctors and government health officials should set limits (?), as they do for alcohol, on the amount of time children spend watching screens – and under-threes should be kept away from the television altogether, according to a paper in an influential medical journal published on Tuesday. A review of the evidence in the Archives Of Disease in Childhood says children’s obsession with TV, computers and screen games is causing developmental damage as well as long-term physical harm. Doctors at the Royal College of Paediatrics and Child Health, which co-owns the journal with the British Medical Journal group, say they are concerned. Guidelines in the US, Canada and Australia already urge limits on children’s screen time, but there are none yet in Britain. The review was written by psychologist Dr Aric Sigman, author of a book on the subject, following a speech he gave to the RCPCH’s annual conference. On average, he says, a British teenager spends six hours a day looking at screens at home – not including any time at school. In North America, it is nearer eight hours. But, says Sigman, negative effects on health kick in after about two hours of sitting still, with increased long-term risks of obesity and heart problems. The critical time for brain growth is the first three years of life, he says. That is when babies and small children need to interact with their parents, eye to eye, and not with a screen.