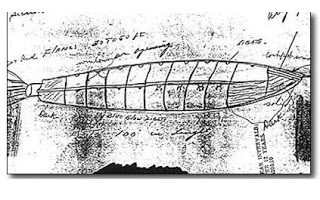 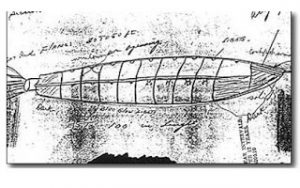 In the early morning hours of June 24, 1948, two Eastern Airlines pilots Clarence Chiles and John Whitted, flying a commercial route from Mobile to Montgomery, AL, narrowly escaped collision with a cigar-shaped UFO. An article, "5 UFO Sightings That Even Non-Crazy People Find Creepy," provides details of the WWII-era encounter, both pilots, made similar drawings (Chiles drawing pictured), "they had seen the object for about 10 to 15 seconds. Both men described the object as cigar- or torpedo-shaped, about 100 feet in length, and about three times the diameter of a B-29 bomber. The "fuselage" was entirely smooth, with no wings, projections or fins. A bright red-orange exhaust was emanating from the object's rear, and was more orange at the outer edges of the exhaust, but grew redder when it rose in altitude. The exhaust extended approximately 30 to 50 feet behind the object. They heard no sound from the object as it sped past the DC-3." Chiles steered the plane hard to the left, in order, to miss the UFO 700 feet on their right, the plane then hit turbulence as Chiles looked back to see the UFO pull up in a steep climb. A passenger, one of few awake at 2:45 am, also witnessed the UFO. An almost identical UFO had also been reported a month earlier in the Netherlands.