china shooting at US spy sats? 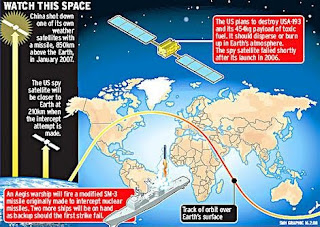 Are Space Wars already happening now? Chris Everard, a British filmmaker, believes so and recaps in “Secret Space Vol. 2, part 1/13 on You Tube” a December 2006 Nexus Magazine issue, which contained republished news reports about China firing lasers at US government satellites! The present writer wonders about two more overt acts such as the Chinese shoot down of their weather satellite in January 2007? One month earlier, the US had launched USA-193, a spy satellite. The satellite owned by the National Reconnaissance Office (NRO) was reported to stop functioning shortly after it entered into orbit. In a similar 2008 action, the United States shoots down the USA-193, calling it a matter of safety? It seems suspect as the debris field left by blowing up a satellite can damage other satellites? A NewScientist article contends an out of control satellite is equally as dangerous. Time magazine questioned the motive behind the satellite shootdown in the following 2008 article.

Is it political as Time suggests? There is a symmetry involved with the two events often paired as in this article. Are the Chinese and American demonstrations only a show of power? The layers of deception may run deeper than even a conspiracy theorist suspects? Could these displays be a horse and pony show to distract from what is really happening in space? If China has lasers why shoot a satellite down with a missile? Why was the US so upset with China’s 2007 shoot down and then follow up with one of their own? It’s a full serving of conspiracy theory for your plate–with only questions and no answers!