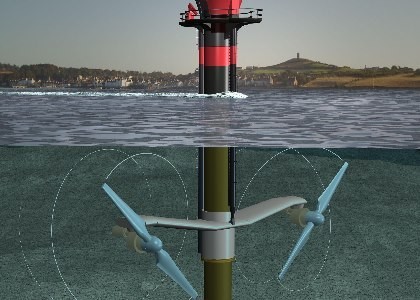 China Takes the Plunge in Getting Power From the Sea

from stratrisks.com: A race is under way to unlock one of the world’s biggest untapped
sources of clean energy - the ocean - with China emerging as an important
testing ground.

That could heighten competition with Western companies down the line,
especially if Chinese businesses begin using technologies developed
with joint-venture partners to expand rapidly.

The European Union so far has led efforts to harness the sea to make
electricity, for which there are three principal techniques: underwater
turbines that draw power from the ebb and flow of tides, surface-based
floats that rely on wave motion and systems that exploit differences in
water temperature.


But with 11,000 miles of coastline rich with energy potential and
pollution that is getting worse, China is seen by many experts as an
ideal location to pioneer and commercialize ocean-energy technologies.


China is stepping up spending in the sector, and foreign companies
including U.S.-based Lockheed Martin Corp. are testing equipment and
entering joint ventures in the country.


Among the projects under study with Chinese backing: the dynamic
tidal-power wall, with turbines using curved blades that are designed to
allow eels and fish to pass through safely. If approved, the wall could
supply as much electricity as 2½ large nuclear reactors—and cost as
much as $30 billion. Investors include the Netherlands government and a
consortium of eight Dutch companies, including engineering firms Arcadis
NV and Strukton Groep NV.


The project involves building a wall running perpendicular from the
coast and then branching off into a T, extending around 20 miles and
studded with turbines that would channel and concentrate the power of
tidal water. Beijing provided $3.3 million for feasibility studies that
are under way in China. Construction is at least a decade away, though
initial findings suggest that shallow waters on the Chinese, Korean and
European coasts could be suitable.


“China is at the cutting edge” in sea-energy technology development, says Mr. de Boer, who is based in Beijing.
ORIGINAL SOURCE: WSJ