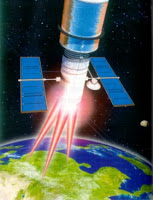 from ap: A Chinese submarine will send test signals that could change the course of a satellite when China launches its first moon orbiter, as part of the country's effort to develop space war technology, a human rights watchdog said Tuesday.

The Information Center for Human Rights and Democracy said two survey ships are deployed in the South Pacific Ocean and South Atlantic Ocean to send signals to maneuver the lunar exploration satellite, expected to be launched Wednesday. At the same time, a nuclear-powered submarine will send simulated signals to the satellite as a test, it said in a statement.

Once the satellite-maneuvering technology matures, the group said, China would have the know-how to destroy other satellites in space in wartime...

China shocked the world in January by firing a missile at an old weather satellite without notifying anyone in advance, showing off its anti-satellite weaponry and its ability to shoot down satellites without being immediately noticed.