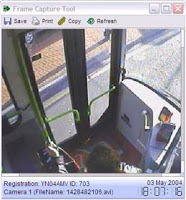 from ap: More & more, trains & bus riders in the Cleveland area are being watched. The Regional Transit Authority is working toward installing cameras on all 700 of its buses.

Rapid trains are next, with most to be equipped by the end of the year. The chief of the RTA's police force, John Joyce, says the cameras have led to arrests for everything from felonious assault to arson. He says they've also acted as deterrent.

According to Greg Hull of the American Public Transportation Association, improved technology and cheaper prices have made it easier for transit agencies across the country to add cameras. The availability of Homeland Security grants and other federal money has also contributed to the recent, more widespread use of the cameras.