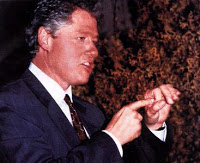 from ap: Bill and Hillary Rodham Clinton liquidated the contents of their blind trust upon learning it contained investments of $5 million to $25 million that could pose conflicts of interest or prove to be embarrassing to her presidential campaign.

The blind trust and a bank account valued in the same range place the Clinton’s total wealth at between $10 million and $50 million.

The Clintons had to disclose the contents of the blind trust in April under instructions from the Office of Government Ethics and sold the assets in May, according to a disclosure form filed Friday. The Clintons have had a blind trust continuously since 1993 and had no control over its transactions.

The blind trust held stock in pharmaceutical companies, including $250,000-$500,000 in Biogen Idec and Johnson & Johnson and $100,000- $250,000 in Amgen, Pfizer and GlaxoSmithKline. It also invested in General Electric and Raytheon, two leading defense contractors. The trust had a varied portfolio, with investments in numerous other companies, including Exxon Mobil, BP Amoco, Walt Disney and eBay.