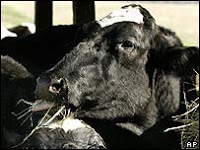 cloned animals are ‘safe to eat’

from bbc: Meat and milk from cloned animals is generally safe to eat, the US Food and Drug Administration (FDA) has declared. Following six years of study, it ruled that food from cloned pigs, cattle and goats and their offspring is as safe as food from conventionally-bred animals. Lack of data meant the agency could not reach a decision on sheep products. The FDA does not expect to see a lot of products from cloned animals being sold, because of cost. It says clones would be used mainly for breeding. The agency released almost identical draft conclusions in December 2006. Since then, new scientific information has strengthened its central view.

cloned microchipped beef: it's what's for dinner
from legitgov: "Final risk assessment" effectively removes the last U.S. regulatory barrier to the marketing of meat and milk from cloned cattle, pigs and goats. FDA officials have said they do not expect to require food from clones to be labeled as such, but they may allow foods from ordinary animals to be labeled as not from clones. "One of the amazing things about this," Joseph Mendelson, legal director of the Center for Food Safety said, "is that at a time when we have a readily acknowledged crisis in our food safety system, the FDA is spending its resources and energy and political capital on releasing a safety assessment for something that no one but a handful of companies wants."

update: usda recommends that food from clones stay off the market
from washington post: The U.S. Department of Agriculture yesterday asked U.S. farmers to keep their cloned animals off the market indefinitely even as Food and Drug Administration officials announced that food from cloned livestock is safe to eat. Bruce I. Knight, the USDA's undersecretary for marketing and regulatory programs, requested an ongoing "voluntary moratorium" to buy time for "an acceptance process" that Knight said consumers in the United States and abroad will need, "given the emotional nature of this issue." Yet even as the two agencies sought a unified message - that food from clones is safe for people but perhaps dangerous to U.S. markets and trade relations - evidence surfaced suggesting that Americans and others are probably already eating meat from the offspring of clones.