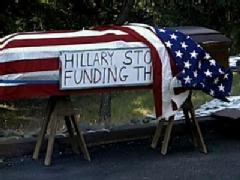 from kcra: A fundraising event for Democratic presidential candidate Hillary Clinton was delayed three hours while the Sacramento County bomb squad investigated a coffin brought to the area by anti-war protesters.

Anti-war activists Virginia and Stephen Pearcy, who made headlines in February 2005 for hanging an effigy of a soldier on their Land Park area home, brought a flag-draped coffin as a protest against United States involvement in Iraq.

Shortly before 6 p.m. Thursday, the Secret Service began to conduct a sweep of the area and asked to look inside the coffin. Pearcy refused, stating that they had no probable cause to do so. This prompted the Secret Service to call in local law enforcement and a bomb squad.

Former state Treasurer Phil Angelides, along with about 120 other guests set to attend the fundraiser, had to wait several hours before being ushered through a neighbor's back yard to get to the event.

Around 9 p.m., the all-clear was given by the bomb squad, and the motorcade carrying Clinton arrived at the event.

The $500- to $4,600-per-person campaign fundraiser was being held at the home of real estate developer Eleni Tsakopoulos-Kounalakis and Markos Kounalakis.

Clinton also attended a campaign stop in Silicon Valley Thursday, in which she discussed plans to create more high-paying jobs and maintain U.S. dominance in the technology sector.