from ted pike: By a vote of 60 to 39 this morning, Sens. Kennedy and Smith's hate crimes amendment was attached to the defense authorization act. After three days of virtual silence, several Republican senators spoke against the bill within the two hours of debate. Sen. Lindsey Graham briefly argued that, if passed, the President will veto the hate bill and arms bill together, jeopardizing timely support of our troops...

Remarkably, Sen. Byrd of West Virginia, habitual supporter of the hate bill, voted against it. If only one more pro-hate bill Senator, Democrat or Republican, had been persuaded, either by massive calling during the last week or by impassioned attack of the hate bill on the floor of the Senate, the hate bill would have been destroyed in this Congress. 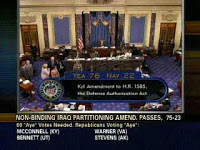 from thinkprogess: By a vote of 76-22, the Senate passed the Lieberman-Kyl amendment, which threatens to “combat, contain and [stop]” Iran via “military instruments.” Sen. Jim Webb (D-VA) called the amendment “Cheney’s fondest pipe dream” and said it could “read as a backdoor method of gaining Congressional validation for military action.”

UPDATE Before the vote today, changes were made to the original amendment, with paragraphs three and four taken out completely. This paragraph was also added at the end:

“Secretary of Defense Robert Gates stated on September 16, 2007 that “I think that the administration believes at this point that continuing to try and deal with the Iranian threat, the Iranian challenge, through diplomatic and economic means is by the preferable approach. That the one we are using. We always say all options are on the table, but clearly, the diplomatic and economic approach is the one that we are pursuing.”

UPDATE II: The roll call for the vote is here.