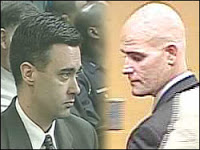 Officer J.R. Smith told a state judge Thursday that he regretted what had happened.

"I'm sorry," the 35-year-old said, his voice barely audible. He pleaded guilty to manslaughter, violation of oath, criminal solicitation, making false statements and perjury, which was based on claims in a warrant.

Former Officer Gregg Junnier, 40, who retired from the Atlanta police in January, pleaded guilty to manslaughter, violation of oath, criminal solicitation and making false statements. Both men are expected to face more than 10 years in prison.

In a hearing later in federal court, both pleaded guilty to a single charge of conspiracy to violate a person's civil rights, resulting in death. Their state and federal sentences would run concurrently.

The charges followed a Nov. 21 "no-knock" drug raid on the home of Kathryn Johnston, 92. An informant had described buying drugs from a dealer there, police said. When the officers burst in without warning, Johnston fired at them, and they fired back, killing her.

Fulton County prosecutor Peter Johnson said that the officers involved in Johnston's death fired 39 shots, striking her five or six times, including a fatal blow to the chest.

He said Johnston fired only once through her door and didn't hit any of the officers. That means the officers who were wounded likely were hit by their own colleagues, he said.

Junnier and Smith, who is on administrative leave, had been charged in an indictment unsealed earlier Thursday with felony murder, violation of oath by a public officer, criminal solicitation, burglary, aggravated assault with a deadly weapon, and making false statements...

The deadly drug raid had been set up after narcotics officers said an informant had claimed there was cocaine in the home.

When the plainclothes officers burst in without notice, police said, Johnston fired at them, and they fired back.

Assistant U.S. Attorney Yonette Sam-Buchanan said Thursday that although the officers found no drugs in Johnston's home, Smith planted three bags of marijuana in the home as part of a cover story.

The case raised serious questions about no-knock warrants and whether the officers followed proper procedures...

After the shooting, a man claiming to be the informant told a television station that he had never purchased drugs there, leading Pennington to admit he was uncertain whether the suspected drug dealer actually existed...