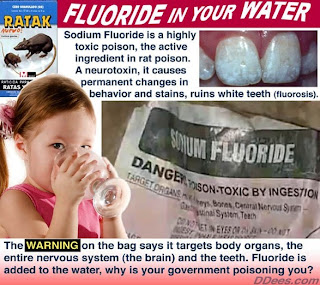 from naturalnews.com: The driving force behind adding fluoride to the drinking water of Portland and surrounding communities is Upstream Public Health, but the group's plan has been challenged via a referendum effort that could block the council's unanimous Sept. 12 vote of approval. Just slipped their minds? Lobbyists, in a recently filed disclosure, reported meeting with commissioners Randy Leonard on July 26, Dan Saltzman and Nick Fick on Aug. 2, Amanda Fritz on Aug. 6 and Adams on Aug. 27 to push their case for adding fluoride to water. Yet, those same officials, who are required by rule to publicly post their calendars on a quarterly basis, "either didn't disclose them meetings about fluoride or left a vague subject heading," The Oregonian reported, adding that both Adams and Leonard said they weren't actually present at the meetings. Leonard has been a proponent of the fluoride plan. According to his calendar, he had four meetings on July 26, but none were about fluoride. Saltzman, meanwhile, had three meetings listed for Aug. 2 with the city forester, the police union and one regarding a homeless camp - nothing about fluoride. Of nine slots on Fish's calendar, he reported a single 30-minute meeting Aug. 2 with "Health Coalitions" but did not provide specifics about the group or the topic of discussions. Fritz, who reports weekly rather than daily appointments on her calendar, listed 16 meetings or events for the aforementioned period of time; none listed fluoride as the topic or Upstream Public Health as an organization she met with. Finally, Adams listed six items on his calendar for Aug. 27, including a meeting with Police Chief Mike Reese, a meeting regarding trade with Brazil, one with Transportation Director Tom Miller, a media event and two blocks for "office time." Again, nothing about fluoride. City code requires elected officials to post their calendars "of activities related to official city business" 15 days after the end of the preceding quarter. That deadline was Oct. 15. There is one exception - if an elected official "determines that such posting posses a safety threat." It seems, now that allegations of impropriety have hit the light of day, everyone has an excuse about why they didn't do their duty and inform the public what was happening.