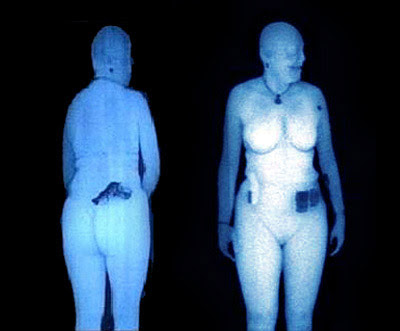 from threat level: A federal appeals court on Friday unanimously declined to block the government from using intrusive body scanners across airports nationwide, saying it is “not persuaded by any of the statutory or constitutional arguments” against them. The U.S. Court of Appeals for the District of Columbia Circuit was deciding a constitutional and procedural challenge to the Advanced Imaging Technology “nude” body scanners, which began rolling out in 2007 and are deployed to at least 78 airports nationwide. The Electronic Privacy Information Center asked the court to block usage of the devices — of which 500 more are to be rolled out this year — on grounds that they are an unconstitutional privacy invasion, ineffective and unhealthy to airline passengers.

“The petitioners argue that using AIT for primary screening violates the Fourth Amendment because it is more invasive than is necessary to detect weapons or explosives,” the appeals court noted. “As other circuits have held, and as the Supreme Court has strongly suggested, screening passengers at an airport is an ‘administrative search’ because the primary goal is not to determine whether any passenger has committed a crime but rather to protect the public from a terrorist attack.”

The court said that, whether an administrative search is unreasonable, is a balancing test on how much it intrudes upon an individual’s privacy, and how much that intrusion is needed for the promotion of “legitimate” government interests. “That balance clearly favors the government here,” the court ruled 3-0. The court added that an “AIT scanner, unlike a magnetometer, is capable of detecting, and therefore of deterring, attempts to carry aboard explosives in liquid powder form.” The three-judge appellate panel did not address limited research suggesting that the machines might not detect explosives or even guns taped to a person’s body.