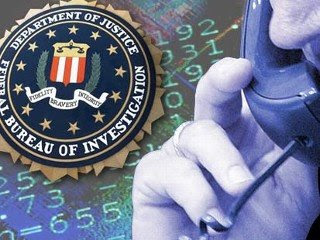 from abcnews: The release of the 2010 budget request has shed more light on some FBI surveillance programs the bureau is currently developing and testing. While the FBI has been criticized at times for its slow reforms after the 9/11 attacks, which revealed the FBI did not have adequate computer resources, some of the new programs sound like something out of a high-tech cloak and dagger film. The budget request shows that the FBI is currently developing a new "Advanced Electronic Surveillance" program which is being funded at $233.9 million for 2010. The program has 133 employees, 15 of whom are agents. According to the budget documents released Thursday, the program, otherwise known as "Going Dark," supports the FBI's electronic surveillance intelligence collection and evidence gathering capabilities, as well as those of the greater Intelligence Community. 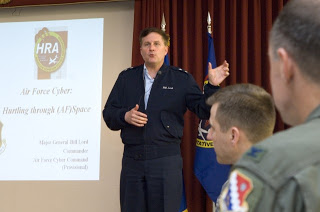 from defencetalk: The Air Force's top cyber official told a mostly industry-based audience here May 8 that the cyber arena is filled with new business opportunities, and some very hard challenges. "In an Air Force that is a lot of times focused on kinetic activity - read that as F-16 (Fighting Falcons) and 2,000-pound bombs - not at warfare conducted in a different manner at the speed of light, cyber operations require some new thinking," said Maj. Gen. William Lord, commander of Air Force Cyber Command (Provisional). Speaking to about 125 people at the Hanscom Representatives Association meeting here, he noted that it's very difficult to find out who the attackers are or even what their attributes and intentions are. He also noted that existing laws and policies often hamper the ability of U.S. cyber experts to find the answers or to launch an attack of their own. "It's easier for us to get approval to do a kinetic strike with a 2,000-pound bomb than it is for us to do a non-kinetic cyber activity," General Lord said. Yet while law, policy and culture all present potential barriers to effectively controlling cyberspace, technology needs are just as vital. "Our trouble today is that we're always shooting behind the rabbit... We wait for the latest exploit, and then when something bad happens, we figure out how to fix it."

china developed its own operating system for cyber war with US
from world tribune: A leading cyber security specialist said last week that China has developed its own ultra-secure operating system for a strategic edge in its cyber warfare with U.S. computer systems. Kevin G. Coleman, a specialist with the Technolytics Institute and consultant to the office of the Director of National Intelligence, said in congressional testimony that the United States is woefully unprepared to counter cyber attacks on its electronic infrastructures. Part of the cyber arms race includes China’s creation of Kylin, a new "hardened" operating system. It began converting systems to it in 2007, according to the current edition of East-Asia-Intel.com.

information-sharing platform hacked
from fcw: The Homeland Security Department’s platform for sharing sensitive but unclassified data with state and local authorities was hacked recently, a DHS official has confirmed. The intrusion into the Homeland Security Information Network (HSIN) was confirmed to Federal Computer Week by Harry McDavid, the chief information officer for DHS’ Office of Operations Coordination and Planning. McDavid said the U.S. Computer Emergency Readiness Team reported an intrusion into the system in late March. The initial hack was brief and limited, and it was followed by a more extensive hack in early April, McDavid said.

US warns of 'military' response to hackers

general: we just might nuke those cyber attackers
from danger room: How would the American military respond to an attack on its networks? If we take the commander of U.S. strategic forces at his word, they’d nuke those hackers, if need be. Speaking to reporters at a press breakfast last week, Gen. Kevin Chilton, the head of U.S. Strategic Command, said the president retained the option to retaliate with military force in the event of a serious cyber attack against U.S. networks. Global Security Newswire’s Elaine Grossman has the key quote: “I think you don’t take any response options off the table from an attack on the United States of America... Why would we constrain ourselves on how we respond?”

the first major solar flare of 2009:
is this a sign the sun will return to normal?*
pentagon preps soldier telepathy push*
bomb detection ceo could be new darpa chief*
pentagon & congress square off over unconventional war shift*
the (supposed) reasons behind google & ibm being ahead of the competition*
famed ufo historian: humanity may be targeted by predatory reptilian extraterrestrial species*