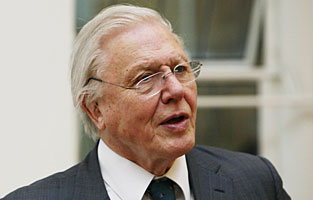 from independent.co.uk:  Sir David Attenborough (pictured) has attacked the idea of sending food aid to countries enduring famine as “barmy” and has urged for more debate about population control, it has been reported.
The natural history broadcaster warned that the world was “heading for disaster” due to the threat of overpopulation, in comments made to the Daily Telegraph.
He said that unless human beings do not act soon the “natural world will do something”.
He added that the natural world has been doing it “for a long time” and more discussion is needed.
Raising the example of Ethiopia, Sir David said that the famine there was down to there being “too many people for too little piece of land”.
Speaking ahead of his new series David Attenborough's Rise of Animals, he suggested that humans are “blinding ourselves” to the problem, claiming, “We say, get the United Nations to send them bags of flour. That's barmy”.
He cited “huge sensitivities” like the right to have children and the Catholic Church's stance on contraception as barriers to talking about population control.
He added that the issue could also be misconstrued as an attack on poor people as the areas of concern are Africa and Asia.
Discussing comments he made on population control earlier this year, when he described human beings as a “plague on the Earth”, Sir David agreed they could be considered “blindlingly obvious,” but suggested that nobody else had made the point publicly.
Food-World-Order Flashback:
California Throws Away Enough Food to Fill 35 Stadiums a Year
“Just keep on about it. Just keep on about it,” he said, when asked by the paper about the next step to solving the problem. “You know and I know that there are huge, huge sensitivities involved in this.
“To start with, it is the individual's great privilege to have children. And who am I to say that you shan't have children? That's one thing.
“Then the next thing is that there's a religious one, in the sense that the Catholic Church doesn't accept this. That you should control the population."