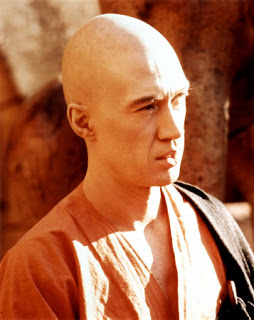 from copycat effect: Thai police have reported that actor David Carradine, 72, has been found dead with a rope around his neck, according to the BBC News. That is how this news is being broadcast globally. On June 4, 2009, Carradine was found dead in his room at the Park Nai Lert Hotel in Junfan Mulay, Bangkok, Thailand. The initial police report indicated that Carradine had died by suicide by hanging himself; he was found by a hotel maid sitting in a wardrobe (closet) with a rope around his neck and body. David Carradine was the star of the 1970s television series "Kung Fu”," lead as the folksinger Woody Guthrie in Bound for Glory (1976), and the title villain of the “Kill Bill” movies (2003, 2004). The United States Embassy in Bangkok noted that Carradine had been found dead in his hotel suite in Bangkok, where he was working on a movie.

update: carradine death maybe accidental auto-erotic asphyxiation
from ap: Thai police say that American actor David Carradine, a cult star best known for the 1970s TV series "Kung Fu," may have died from accidental suffocation, after authorities found him dead in a Bangkok hotel closet with a rope tied to his neck and genitals. The 72-year-old actor's body was discovered Thursday hanging in the closet of his luxury hotel room. Police initially said they were investigating and suspected suicide, though one of Carradine's managers questioned that theory. Police Lt. Gen. Police Lt. Gen. Worapong Chewprecha has told reporters that Carradine was found with a rope tied around his genitals and another rope around his neck. He says it was unclear whether Carradine died of suicide, suffocation or heart failure due to an orgasm.