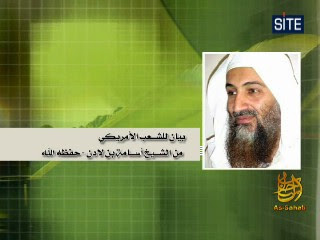 a day late & a dollar short: another ‘new message’ from ‘osama’

SITE Intelligence Group, a terrorist-monitoring firm that translated the address, said bin Laden, whose al-Qaida organization was behind the Sept. 11 attacks, blamed the war on the "pro-Israel lobby" and corporate interests.

IntelCenter, another company that monitors terrorist propaganda, said the 11-minute video shows a still picture of bin Laden while audio of the address plays.

Bin Laden's address to the American people comes two days after the eighth anniversary of the Sept. 11 attacks. He typically addresses the United States in a message around the Sept. 11 anniversary.

The purpose of his address Sunday, bin Laden said in the SITE translation, is "to remind you of the causes" of Sept. 11, chiefly "your support to your Israeli allies who occupy our land of Palestine."

Bin Laden argued against the claims that the war is necessary for U.S. security, saying current White House officials are merely following the strategy of former President George W. Bush and former Vice President Dick Cheney to "promote the previous policies of fear to market the interests of big companies."

When Obama became president and retained many of the Bush administration's military leaders, such as Defense Secretary Robert Gates, "reasonable people knew that Obama is a powerless man who will not be able to end the war as he promised," bin Laden said.

"If you end the war, so to it," bin Laden said. "But if it is otherwise, all we will do is continue the war of attrition against you on all possible axes."