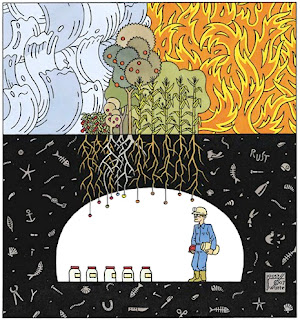 from civileats.com: Twitter-land was abuzz last week with news that a formerly ardent critic of genetic engineering (GE) has recanted his position. Mark Lynas gave a long mea culpa speech at the Oxford Farming Conference, in which he apologized to the world for tearing up GE crops back in the day, and for what he described as his “anti-science environmentalism.”

Unfortunately, Lynas then went on to ignore the weight of scientific evidence (more on that below). He claimed that GE crop production is good for biodiversity and necessary to feed the world, that organic farming is bad, and that “there is no reason at all why avoiding chemicals should be better for the environment.” He then quickly slammed the door shut on public debate, pronouncing “discussion over.” Many of us in the global scientific community were left shaking our heads, bemused if disappointed in Lynas’ anti-science rhetorical flourishes.

Less rigorous was the response of journalists at the New York Times, New Yorker, L.A. Times, Slate and the Economist, who essentially reprinted large swaths of Lynas’ speech, congratulating him on his “courageous” about-face, without bothering to investigate the veracity of any of his claims.