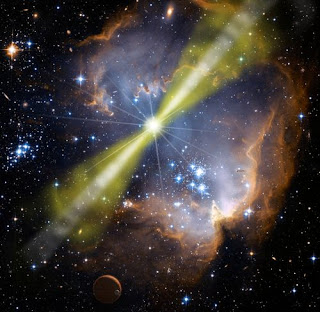 A Daily Galaxy article reveals dramatic event occurred several years ago in a far corner of our Galaxy:

“It came suddenly from the distant reaches of the Constellation Sagittarius, some 50,000 light years away. For a brief instant, a couple of tenths of a second, on December 27, 2004, an invisible burst of energy the equivalent of half a million years of sunlight shone on Earth. Many orbiting satellites electronics were zapped and the Earth’s upper atmosphere was amazingly ionized from a massive hit of gamma ray energy.”

“The source of the invisible attack was a rare magnetar, SGR 1806-20, on the other side of the Milky Way. These soft gamma ray repeaters, SGRs, occur when twisted magnetic fields attempt to realign themselves and crack the magetar’s crust releasing the awesome burst or pulse of energy with a death-zone of a few light years. Magnetars have magnetic fields 1000 times those of ordinary pulsars -so powerful as to be lethal at a distance of 1000 kilometers.”

Gamma Ray Bursts are explained, in article, as brightest event in the universe:

“Gamma-ray bursts are the universe’s most luminous explosions. Most occur when massive stars run out of nuclear fuel. As a star’s core collapses, it creates a black hole or neutron star that, through processes not fully understood, drive powerful gas jets outward. These jets punch through the collapsing star. As the jets shoot into space, they strike gas previously shed by the star and heat it. That generates bright afterglows.”

“A very interesting event occurred almost simultaneously with the Tsunami event but it appears few have noticed but this gamma ray burst almost coincided with the tectonic event (it was slightly afterward) here on Earth. I am curious if what we witnessed was a gravitational bow wave effect that preceded the actual gamma radiation as a shock-wave. Just coincidence?”