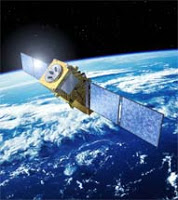 from raw story: A plan to dramatically widen US law enforcement agencies' access to data from powerful spy satellites is moving toward implementation, as Department of Homeland Security Secretary Michael Chertoff expects to finalize a charter for the program this week, according to a new report.

Chertoff insists the scheme to turn spy satellites -- that were originally designed for foreign surveillance -- on Americans is legal, although a House committee that would approve the program has not been updated on the program for three months.

"We still haven't seen the legal framework we requested or the standard operation procedures on how the NAO will actually be run," House Homeland Security Chairman Bennie G. Thompson tells the Wall Street Journal. Thompson was referring to the National Applications Office -- a new DHS subset that would coordinate access to spy-satellite data for non-military domestic agencies, including law enforcement.