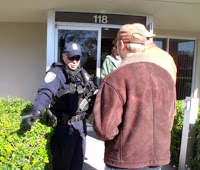 from paul joseph watson: Residents of Leesburg, Florida were shocked to see their local Social Security office turned into a random Homeland Security checkpoint Tuesday morning, as DHS officers armed with semiautomatic rifles and accompanied by sniffer dogs checked identifications of locals. “With their blue and white SUVs circled around the Main Street office, at least one official was posted on the door with a semiautomatic rifle, randomly checking identifications. And other officers, some with K-9s, sifted through the building,” reports the Daily Commercial. The activity was part of Operation Shield, an unannounced drill conducted by the DHS’ Federal Protective Service centered around “detecting the presence of unauthorized persons and potentially disruptive or dangerous activities.”