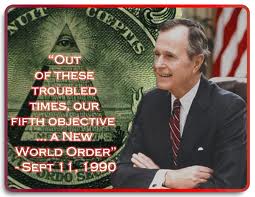 Did Externalization of Hierarchy Begin 9-11-90?

Do Illuminati refer to themselves and goal of a New World Order as simply "the organization" and "The Plan"?   Carolyn Hamlett, who broke away, offers inside vantage point in recent article, "The Plan." Hamlett relates her perspective:  "I have known "The Plan" since I was a
small child and have seen it carried out just as I was told it would be.
When I was a small child, I was told that just before the end of the
20th Century, one of our members of the organization would be chosen, a
man, who would emerge on the world political scene to introduce some of
our esoteric terms to the masses under the guise of peace and security.
This was also to be a signal for those serving the organization that 'The Plan' was in it's final stages and was stepping out from the
underground, to become exoteric...Thus, 'The Plan' could step out from the shadows to work openly before the very eyes of the sleeping masses.  It was George Bush Sr. who was the chosen 'light bearer', who on September 11, 1990 at 9:09 PM gave his famous 'Toward a New World Order speech'."

Is this a simple retelling by Hamlett what she's known all her life? Alice Bailey prophesied about a New Age of a political and religious New World Order. Wikipedia informs, "according to Bailey, a group of ascended masters called the Great White Brotherhood works on the "inner planes" to oversee the transition to the New World Order but, for now, the members of this Spiritual Hierarchy are only known to a few occult scientists, with whom they communicate telepathically, but as the need for their personal involvement in the plan increases, there will be an "Externalization of the Hierarchy" and everyone will know of their presence on Earth." Carolyn Hamlett relates life on inside as member of Illuminati family in a 2011 interview on Extract. The story Hamlett relates seems far from the light, it sounds like operant conditioning.