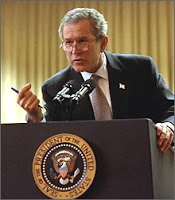 from raw story: "Don't worry, it's not as bad as it looks," President Bush reportedly told a friend depressed by the ongoing "unpopular" war and GOP woes, according to an article in Sunday's Washington Post.

"For a man who presides over an unpopular war, just lost Congress and faces a final two years with constrained options, Bush gives little sign of self-pity," Peter Baker writes.

The analysis, entitled "Stubborn or Stalwart, Bush Is Loath to Budge," examines the following questions: "At what point does determination to a cause become self-defeating folly? Can he change direction in a meaningful way without sacrificing principle?"