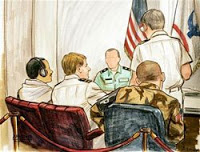 from dpa: The former driver for Osama bin Laden pleaded not guilty to terrorism-related charges on Monday as the first trial under US President George W Bush's controversial military commissions got under way in Guantanamo Bay, Cuba. Salim Hamdan, a Yemeni national, has been charged with conspiracy and providing material support for terrorism and faces a maximum sentence of life in prison if convicted.

Hamdan is alleged to have served as bin Laden's driver and bodyguard before his capture in 2001 and transfer to the US detention centre at the naval station in Cuba the following year. Hamdan alleges he was abused during intense interrogations while in US custody, and has been among the most active Guantanamo detainees challenging the legal process in federal court, including in a key ruling by the US Supreme Court in June 2006 that US President George Bush's commissions were unconstitutional and violated the Geneva Conventions.