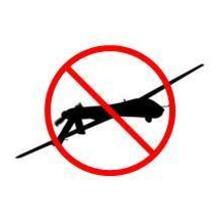 from journal-neo.org: The
scenario is in a dystopian future, where small, nearly undetectable
unmanned flying machines are spying on the citizenry. These flying
surveillance units hover overhead, peek into windows and have been known
to carry a chemical weapons payload and can attack and kill.

According to
some pundits, that future has arrived. While drone attacks rage in
Yemen, Pakistan and elsewhere, domestic use of drones in the United
States and elsewhere is on the rise—sharply. The names of authorized
drone users released by the Federal Aviation Administration reveals not
only federal agencies such as Customs and Border Patrol and the FBI, but
also features numerous local police agencies and colleges gracing the
authorization list. At least one tribal entity is also included.

Apparently,
no one is immune from drone surveillance. None other than the chairman
of the intelligence oversight committee in the US Senate, Dianne
Feinstein, recently reported seeing a little drone peering through her window.

In
response to a spike in generalized and regrettably realistic paranoia,
some US manufacturers are now offering personal drone protection
systems. Gone are the days when hiring a bruiser with a bulge in his
holster would be satisfactory insurance against unwanted intrusions. As
electronic surveillance techniques continue to become more
sophisticated—with drones now high on the list of potential threats—the
spectre of drone surveillance has resulted in new technology to shield
from these.

There
are options, as you may have intuited. Domestic Drone Countermeasures
will fight fire with fire, or more accurately, deploys electronic
detection systems to pick up transmissions from incoming drones.

Domestic
Drone Countermeasures offers a mesh system and detection grid. This is
how it works: the basic Personal Drone Detection System comes with two
detection sensor nodes as well as a Privacy Command Control Module.
These three boxes create a network system that can identify and
triangulate moving transmitters (ie, drones). You can key into the
system existing local transmitters (like your smart phone) and program
the system to ignore these signals.

If
a signal then occurs which is not designated to be ignored, the
Personal Drone Detection System will determine that signal to be hostile
and will sound an alarm. According to the company, each sensor can
detect an incoming drone within 50 feet in all directions.

Additional sensor nodes can be acquired to increase the size of the mesh network.

A
company called DroneShield uses acoustic detection technology to
determine the presence of drones. According to this company, “Each
DroneShield contains a database of common drone acoustic signatures so
false alarms are reduced.”

Sound
detection is accomplished in the following manner: a unique sound
pattern or algorithm is first identified, then broken into minute
digital slices using a technology called analog to digital conversion
(ADC). From that point, it is fairly simple to determine if the sound
detected fits the signature of a drone. If so, an alarm is then sounded.
According to reports, the system can detect an incoming drone a half a
mile away.

DroneShield
offers customized attention and states that it will come to your
location to do a needs assessment. DroneShield also offers maintenance
and update services, as the drones may become even harder to detect. As
discussed recently on the DroneShield website, the new Bebop drone may
not be detectable through a prior signature (called Parrot AR).
DroneShield promises it is already at work on the Bebop acoustic
signature.

According to DroneShield founder John Franklin, eighteen countries have already placed orders for his Shield system.

In addition, a
French company, Orelia, has thrown its hat into the ring and is also
offering drone detection systems. Their Drone Detector also works by
analyzing the acoustic signature.

It is not only the
potential intrusion by governments that is driving the market for drone
detection systems. According to recent news reports, drugs and weapons
are being smuggled into prisons by civilian drones. The rich and famous
are also now complaining that their privacy is being invaded by drone
spying fans.

On the lighter
side, Domino’s Pizza has used drones to deliver fresh, hot pizza to
people dining in. And drones have also been used by some news reporters
to capture a different “angle” on a breaking story. Civilian drones,
once priced at about $1000 (camera included) are now available at a rock
bottom price of $50.

Both Google and
Facebook have acquired aerospace companies which are also involved in
drone manufacturing. According to the press releases, these Internet
giants are seeking to develop ways to use drones to bring the web to remote areas.

Or maybe they are
simply cementing their relationships with the NSA. Both Google and
Facebook have been mentioned in NSA spying scandals which have
highlighted their accommodation of spying on Internet users.

The
day is fast approaching when the old Spy vs. Spy paradigm may be
replaced (or enhanced) with Drone vs. Drone. Those wishing simply to be
left alone may end up barricading themselves behind an electronic net of
detection and protection systems. Dystopian future? Looks like it is
already here.

Janet
C. Phelan, investigative journalist and human rights defender that has
traveled pretty extensively over the Asian region, an author of
a tell-all book EXILE, exclusively for the online magazine “New Eastern Outlook