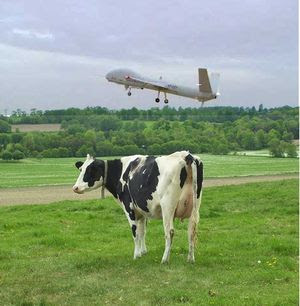 What's the world coming to? Predator B drones called in from Grand Forks AFB to assist in June cattle theft. Three men were arrested by local North Dakota Sheriff Kelly Janke after drone helped locate three family members, suspected in stealing six cows. "As the unmanned aircraft circled 2 miles overhead... sophisticated sensors under the nose helped pinpoint the three suspects and showed they were unarmed. Police rushed in and made the first known arrests of U.S. citizens with help from a Predator, the spy drone that has helped revolutionize modern warfare," as reported in LA Times. "But that was just the start. Local police say they have used two unarmed Predators based at Grand Forks Air Force Base to fly at least two dozen surveillance flights since June,"adds article. The FBI and DEA have also employed drones in their investigations. You can read more coverage at Signs Of The Times, where corporate profits enjoy precedence over public safety in implementing drones in unfriendly skies above a surveillance state. Have we passed by a road sign advising travelers, "Welcome To The United Police States of America?"