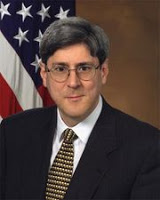 from washington post: Intelligence provided by former undersecretary of defense Douglas J. Feith to buttress the White House case for invading Iraq included "reporting of dubious quality or reliability" that supported the political views of senior administration officials rather than the conclusions of the intelligence community, according to a report by the Pentagon's inspector general.

Feith's office "was predisposed to finding a significant relationship between Iraq and al Qaeda," according to portions of the report, released yesterday by Sen. Carl M. Levin (D-Mich.). The inspector general described Feith's activities as "an alternative intelligence assessment process."

An unclassified summary of the full document is scheduled for release today in a hearing of the Senate Armed Services Committee, which Levin chairs. In that summary, a copy of which was obtained from another source by The Washington Post, the inspector general concluded that Feith's assessment in 2002 that Iraq and al-Qaeda had a "mature symbiotic relationship" was not fully supported by available intelligence but was nonetheless used by policymakers.

At the time of Feith's reporting, the CIA had concluded only that there was an "evolving" association, "based on sources of varying reliability."