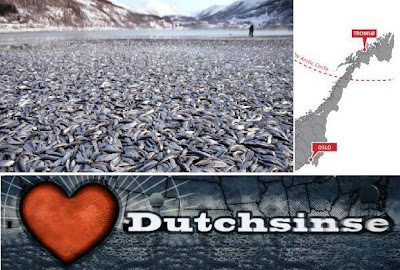 Dutchsinse reports large fishkill may be indicator of possible earthquake! It may seem unrelated, argues Dutchsinse, but sees a killoff as anticipating an earthquake.  New Zealand and California cited by Dutchsinse as examples of phenomena. The Extinction Protocol 2012 and beyond website reported 20 tons of dead herring washed ashore on New Year's Eve, outside of Tromso, Norway. It'll be interesting to see if Dutchsinse's prediction pans out?  What would be the causal relationship?