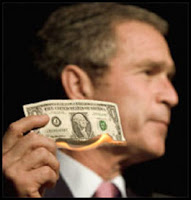 how bush destroyed the dollar

from paul craig roberts: It is difficult to know where Bush has accomplished the most destruction, the Iraqi economy or the US economy. In the current issue of Manufacturing & Technology News, Washington economist Charles McMillion observes that seven years of Bush has seen the federal debt increase by two-thirds while US household debt doubled...

If the US government cannot balance its budget by cutting its spending or by raising taxes, the day when it can no longer borrow will see the government paying its bills by printing money like a third world banana republic. Inflation and more exchange rate depreciation will be the order of the day.

china's buying spree of US firms

from washington post: From his posh office in a coastal city in eastern China, millionaire Zhou Jiaru oversees more than 100 workers at an auto parts refurbishing factory he purchased in a struggling manufacturing town on the other side of the world... Spartanburg, S.C. The Chinese entrepreneur bought it from Richard Lovely, a 56-year-old industrial engineer and mechanic who says his business was in dire straits because of competition from abroad.

Zhou's 85 percent stake in the company now known as GSP North America is one example of how the weak dollar and weakening U.S. economy have made the United States a bargain for overseas companies shopping for investments.

overseas investors buy aggressively in US
from new york times: For much of the world, the United States is now on sale at discount prices. With credit tight, unemployment growing and worries mounting about a potential recession, American business and government leaders are courting foreign money to keep the economy growing. Foreign investors are buying aggressively, taking advantage of American duress and a weak dollar to snap up what many see as bargains, while making inroads to the world’s largest market.