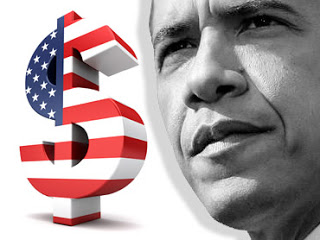 econocrash: another day, another dollar

from afp: The US public debt topped 12 trillion dollars for the first time in history, Treasury officials disclosed Tuesday, moving past a key barrier that raised hackles in Congress. Treasury data showed Monday's outstanding debt at 12.031 trillion dollars, up from 11.999 trillion on Friday. The ballooning debt reflects the massive deficit spending by the government in an effort to revive an ailing economy over more than one year. The public debt topped 10 trillion dollars in September 2008. The debt is quickly approaching the statutory limit of 12.104 trillion dollars, meaning Congress would have to raise the ceiling to prevent a shutdown of government operations.

oregon's defazio says fire geithner & summers
from raw story: President Barack Obama "is being failed by his economic team" and should replace Treasury Secretary Tim Geithner and White House economic policy director Larry Summers, says US House Rep. Peter DeFazio... "I think there is a growing consensus in the [Democratic] caucus [that] we need a new economic team that cares more about jobs, Main Street and the American people than it does about Wall Street and huge bonuses ... reclaim the unspent funds ... reclaim some of the funds that are being paid back, which will not be paid back in full, and we use it to put people back to work rebuilding America's infrastructure... We may have to sacrifice just two more jobs to get millions back for Americans," DeFazio said.

from independent: The wholesome Scandinavian image of furniture and lifestyle giant Ikea has been rudely shaken by a new book which claims the company is hostile to foreign employees and uses Stasi-style secret police methods to spy on its thousands of staff worldwide. The explosive charges are made by a former senior Ikea executive Johan Stenebo, a Swede who started working for the company at one of its German outlets outside Hamburg over 20 years ago and rose to a senior management position. He resigned last year. His book, entitled Sanningen om Ikea (The Truth about Ikea), contains wide-ranging allegations about a company which has become a global household name. Justifying the book to Gemany's Der Spiegel magazine, he said: "I did not want to go along with it any more, but I could not stay silent."

senate health bill said to cost $849b over 10yrs
from nytimes: The Senate majority leader, Harry Reid, put forward his version of sweeping health care legislation on Wednesday, which a Senate aide said would cost $849 billion over 10 years. Mr. Reid promised that it would reduce the federal budget deficit while covering most of the uninsured and adding new benefits to Medicare. The senior Senate Democratic leadership aide said the bill’s costs would be more than offset by new taxes and reductions in government spending, particularly on Medicare, so that the legislation would reduce future federal deficits by $127 billion. The official cost analysis by the nonpartisan Congressional Budget Office was not immediately available, but if the cost projection holds up, it would meet President Obama’s requirement that the bill’s costs be held to about $900 billion. Mr. Reid presented the bill at a meeting with his fellow Democrats. The measure includes a so-called public option allowing people to buy into a new government health insurance plan, but states could opt out of that.

bank of america, ubs, jpmorgan sued over derivatives
from bloomberg: Bank of America Corp., UBS AG and JPMorgan Chase & Co. were sued by a California public utility over claims they rigged sales of municipal derivatives and shared illegal profits through kickbacks. The lawsuit, filed by the Sacramento Municipal Utility District, is based on federal and state antitrust claims. It alleges Charlotte, North Carolina-based Bank of America and more than a dozen other banks conspired to pre-select winners of municipal derivative auctions, coordinated their pricing, and accepted kickbacks disguised as fees from co-conspirators... The banks engaged in “allocating customers and markets for municipal derivatives, rigging the bidding process by which municipal bond issuers acquire municipal derivatives, and conspiring to manipulate the terms that issuers received,” according to the lawsuit.