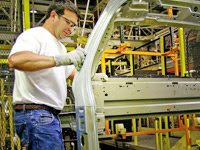 from washington post: U.S. manufacturing activity decreased in December at its fastest pace in nearly 30 years, as businesses cut production and slashed product orders in response to the global recession, according to a closely watched survey. The Institute for Supply Management's index of industrial production slipped from 36.2 percent in November to 32.4 percent in December, the lowest level since June 1980. A reading above 50 indicates that manufacturing activity is expanding, while a reading below 50 indicates a contraction. None of the industries covered in the survey reported an expansion in their business, and the drop registered not just in the institute's index of production, but also in the volume of new orders and raw material costs. "We're looking around for evidence not of things turning up but that things are not going down as rapidly, and at the moment, we can't find any evidence," said Nigel Gault, chief U.S. economist for Global Insight. "Things are falling very fast."

from presstv: The US job losses in 2008 reached the highest level since the end of World War II, a Labor Department report is expected to show. Payrolls fell 500,000 in December, bringing last year's total job losses to 2.4 million, the most since 1945, according to a poll of analysts surveyed by Bloomberg News. The Labor Department figures, due Jan. 9, are also expected to show unemployment rate rising to its highest level since 1993. The jobless rate probably climbed to 7 percent in December from 6.7 percent the prior month, according to the Bloomberg survey. US President-elect Barack Obama warned on Saturday of 'double-digit unemployment' should a 'swift action' not be taken to tackle the financial crisis.

wsj says the 'foundation of new world order is uncertainty'

bailout cost exceeds all american wars
from cnsnews: The total value of the bailouts undertaken by the federal government in 2008 now exceeds the combined cost of every major war the United States has ever engaged in, according to a comparison of war costs calculated by the Congressional Research Service (CRS) and the value of the bailouts as calculated by Bloomberg News or Bianco Research. According to CRS, all major U.S. wars (including such events as the American Revolution, the War of 1812, the Civil War, the Spanish American War, World War I, World War II, Korea, Vietnam, Iraq and Afghanistan, but not the invasion of Panama or the Kosovo War), cost a total of $7.2 trillion in inflation-adjusted 2008 dollars. According to Bloomberg, the federal government has made commitments worth a total of $8.5 trillion in the bailouts of 2008. That includes actual expenditures as well as loan and asset guarantees. Bianco Research puts the total value of the bailouts at $8.7 trillion.

german tycoon adolf merckle commits suicide
from reuters: German billionaire Adolf Merckle has committed suicide, in despair over the huge losses suffered by his business empire during the financial crisis, his family said on Tuesday. The media-shy billionaire, whose family controls some of Germany's best-known companies, was hit by a train on Monday evening, local officials said. "The desperate situation of his companies caused by the financial crisis, the uncertainties of the last few weeks and his powerlessness to act, have broken the passionate family entrepreneur and he took his own life," a family statement said. State prosecutors from the southern city of Ulm said Merckle, 74, left work on Monday and died after being hit by a train near the town of Blaubeuren. He left behind a suicide note to his family, they added. There was no sign of anyone else being involved, they said.

dc metro execs threaten service cuts then hike their own pay
from dc examiner: As its financial situation worsens, the Washington Area Metropolitan Transit Authority is threatening major service cuts and perhaps even some layoffs. But one steadily growing budget item seems particularly impervious to belt-tightening - employee compensation, particularly in the executive suite. Metro’s Approved Fiscal 2009 Annual Budget includes large pay hikes for salaried management employees, as well as hourly workers such as bus drivers, rail operators and maintenance workers. But the numbers take on added significance when compared to previous years... Meanwhile, Metro’s “customers” have to contend with broken escalators, defective subway cars, increasing crime and decreasing system reliability even as they continue to pay the higher fares and parking fees imposed on them last year when most Metro employees were getting yet another raise. But isn’t this the same kind of pay-yourself-first-no-matter-what mentality that nailed Detroit and Wall Street? 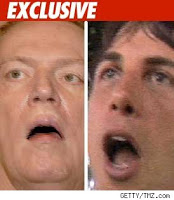 from cnn: Another major American industry is asking for assistance as the global financial crisis continues: Hustler publisher Larry Flynt and Girls Gone Wild CEO Joe Francis said Wednesday they will request that Congress allocate $5 billion for a bailout of the adult entertainment industry. “The take here is that everyone and their mother want to be bailed out from the banks to the big three,” said Owen Moogan, spokesman for Larry Flynt. “The porn industry has been hurt by the downturn like everyone else and they are going to ask for the $5 billion. Is it the most serious thing in the world? Is it going to make the lives of Americans better if it happens? It is not for them to determine.” Francis said in a statement that “the US government should actively support the adult industry's survival and growth, just as it feels the need to support any other industry cherished by the American people."