from propaganda matrix: Revelations about a Florida Congressman that have mired the Republicans in another sex scandal over the weekend continue to rumble across the media spectrum today – but the true scale of organized child sex slavery rings and their connection to the elite is uniformly omitted from polite conversation.

Republican Rep. Mark Foley is now being investigated by the FBI after he sent sexually suggestive emails to boys working as congressional pages. It emerged over the weekend that House leaders had known for months about Foley’s lurid behavior yet chose to look the other way. Foley was co-chairman of the Congressional Missing and Exploited Children’s Caucus.

In the video above Foley dismisses civil liberties concerns and argues that all suspects should be forced to give DNA samples upon arrest. “If I were one of these sickos I would be nervous with America’s Most Wanted on my back,” remarks Foley.

Foley has now been exposed as one of those sickos and the media treadmill continues to afford this individual case blanket coverage – a deluge of attention not received by the thousands of missing children who were and continue to be the victims of gargantuan forced child prostitution rings that operate to service the perverted lust of political, corporate and media elites all across the globe.

On June 29 1989, the Washington Times’ Paul M. Rodriguez and George Archibald reported on a Washington D.C. prostitution ring that had intimate connections with the White House all the way up to President George H.W. Bush. Male prostitutes had been given access to the White House and the article also cited evidence of “abduction and use of minors for sexual perversion.”

In July 1990 a Nebraska Grand Jury was convened to hear allegations that Lawrence “Larry” King, then manager of the Franklin Community Federal Credit Union and a rising Republican party star, along with Washington lobbyists, had set up a child prostitution ring in which minors were transported around the country and forced to have sex with King, other top officials, and according to victims who some allege were later harassed into recanting, then-Vice-President Bush.

The Grand Jury dismissed the case as a hoax but former Nebraska State Senator John DeCamp later investigated the claims and was horrified to learn that they were indeed legitimate.

Click on the enlargements to read the 1989 Washington Times expose.

The video which you can watch in full below, Conspiracy of Silence, was produced by British Yorkshire Television and was scheduled to air nationwide in the U.S. on the Discovery Channel on May 3, 1994. Despite appearing in TV guides, the documentary was pulled at the last minute. Key politicians implicated in the scandal intimidated Discovery into canning the program and it was never shown in the U.S.

The documentary team interviewed victims of the Franklin cover-up scandal and proved beyond a shadow of a doubt that Washington’s political elite had been involved in Larry King’s pedophile ring.

Connections between male prostitutes and the White House emerged again in early 2005, when James Dale Guckert, working under the pseudonym Jeff Gannon, was given privileged access to the White House despite his lack of suitable press credentials. 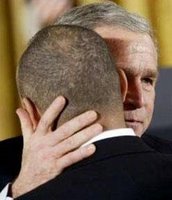 Gannon first came under scrutiny when he repeatedly gave President Bush softball questions during press conferences – leading many to charge Gannon was a White House plant. Photos emerged of Bush embracing Gannon and appearing very affectionate towards him during meetings. It later came out that Gannon had previously placed ads on homosexual escort service websites.

In almost every case of human trafficking for child sex slavery, from Chile to Australia, to Bosnia, to Portugal, to Belgium, court proceedings get shut down or diverted when a clear connection to the elite arises.

In the mid 1990’s, convicted child rapist Marc Dutroux built a secret prison cell in his Charleroi basement where he kept abducted young girls hostage at the behest of what he called “a big crime ring,” which in the 2004 court case was thought by many to encompass some of Belgium’s top politicians, judges and policemen. The reason why it took so long to apprehend Dutroux was that he was being legally protected by these same individuals.

Material witnesses at the trial described “child sex parties involving judges, politicians, bankers and members of the royal family.” Victims that managed to survive (most were butchered snuff style after being raped) verified the claims. 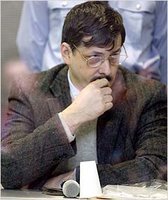 Police actually visited Dutroux’s home and heard the cries of help from children concealed in his basement yet believed Dutroux’s explanation that the sounds were coming from kids playing in the street.

Dutroux was eventually convicted for his role in the pedophile ring but the involvement of the elite of the country was never properly investigated.

After Dyncorp and Halliburton contractors were exposed as having operated child prostitution rackets in the Balkans from the late 1990’s onwards (and more recently in the case of Halliburton), Rep. Cynthia McKinney attempted to get answers as to why the U.S. government continued to do business with these corporations.

On March 11th 2005, McKinney grilled Secretary Rumsfeld and General Myers on the Dyncorp scandal and its protection by the U.S. government.

“Mr. Secretary, I watched President Bush deliver a moving speech at the United Nations in September 2003, in which he mentioned the crisis of the sex trade. The President called for the punishment of those involved in this horrible business. But at the very moment of that speech, DynCorp was exposed for having been involved in the buying and selling of young women and children. While all of this was going on, DynCorp kept the Pentagon contract to administer the smallpox and anthrax vaccines, and is now working on a plague vaccine through the Joint Vaccine Acquisition Program. Mr. Secretary, is it [the] policy of the U.S. Government to reward companies that traffic in women and little girls?”

In late 2005, Halliburton subsidiary KBR and Dyncorp lobbyists worked in tandem with the Pentagon to stall legislation that would specifically ban trafficking in humans for forced labor and prostitution by U.S. contractors.

Where were the investigations and convictions in other cases of establishment orchestrated child slavery and prostitution? Like the NATO officials responsible for the mushrooming of child prostitution in Kosovo?

What happened to UN officials identified as using a ship charted for ‘peacekeepers’ to bring young girls from Thailand to East Timor as prostitutes?

The U.S. media largely failed to even report many of these cases at the time yet Foley’s e mails, which are without a doubt perverted, creepy and fully worthy of further investigation, are given a hundred times more press coverage than huge sex slavery scandals with ties to the elite that resulted in the abduction, abuse, rape and murder of thousands of children across the globe – many of which are still missing today.