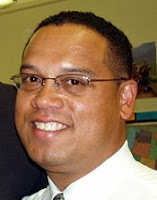 from men's news daily/wikinews: Freshman Congressman Keith Ellison (D-MN), the only Muslim in U.S. Congress, has caused controversy after comparing President Bush to Adolf Hitler, and suggesting that the Bush Administration may have been complicit in the terror attacks of 9/11.

Speaking to a group of atheists in his home district in Minnesota, Ellison equated the 9/11 attacks and aftermath to the 1933 Reichstag fire in Germany, which helped cement Hitler's power.

He carefully parsed his words stating that he would not 'accuse' the Bush Administration of planning 9/11 because "you know, that's how they put you in the nut-ball box - dismiss you".

Ellison, a co-sponsor of a bill to impeach Cheney for "high crimes and misdemeanors," described the Vice President as "the very definition of totalitarianism, authoritarianism and dictatorship" and further condemned his refusal to answer Congress' questions.

Ellison's promise: "You'll always find this Muslim standing up for your right to be atheists all you want," reportedly "raised eyebrows" among the 300 present.

Ellison later clarified that he believes that Osama bin Laden was in fact responsible for the attacks of 9/11.

Condemnation came quickly with Republican Mark Drake of Ellison's home state saying: "To compare the democratically elected leader of the United States of America to Hitler is an absolute moral outrage which trivializes the horrors of Nazi Germany."

you can watch the entire 1hr speech here