the enemy is us! 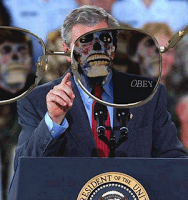 from existentialist cowboy: The very word ‘Frankenstein’ has come to mean ‘monsters of our own creation‘ but more generally, monsters beyond our control. ‘Frankenstein‘ has come to symbolize the Faustian bargain made by man with his own technology. The ’50’s Sci-Fi classic, Forbidden Planet, echoed Shakespeare’s The Tempest which, likewise, dealt with the same theme. [See: Monsters From the ID]

The world is now threatened with several forms of extinction:

* a slow demise from the disregard with which we have treated our environment;

* a descent into either lawlessness or fascism for our neglect of the rule of law;

* the prospect of a quick but not painless end from nuclear annihilation.