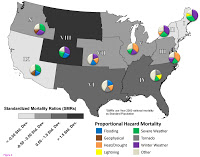 from upi: Scientists using nationwide data collected since 1970 have produced a map depicting natural hazard mortality across the United States. Susan Cutter and Kevin Borden from the University of South Carolina said their map presents a county-level representation of the likelihood of dying as the result of natural events such as floods, earthquakes or extreme weather. "This work will enable research and emergency management practitioners to examine hazard deaths through a geographic lens," the researchers said. "Using this as a tool to identify areas with higher than average hazard deaths can justify allocation of resources to these areas with the goal of reducing loss of life." Cutter and Borden found hazard mortality most prominent in the southern part of the nation, where most people were killed by various severe weather hazards and tornadoes. Other areas of elevated risk are the northern Great Plains where heat and drought were the biggest killers, and in the western mountains with winter weather and flooding deaths. Heat and drought ranked highest among the hazard categories, causing 19.6 percent of total deaths, closely followed by severe summer weather 18.8 percent, and winter weather 18.1 percent. The map is featured in the International Journal of Health Geographics.

the bill nobody noticed: national dna databank
from natural news: In April of 2008, President Bush signed into law S.1858 which allows the federal government to screen the DNA of all newborn babies in the US. This was to be implemented within 6 months meaning that this collection is now being carried out. Congressman Ron Paul states that this bill is the first step towards the establishment of a national DNA database. S.1858, known as The Newborn Screening Saves Lives Act of 2007, is justified as a "national contingency plan" in that it represents preparation for any sort of public health emergency. The bill states that the federal government should "continue to carry out, coordinate, and expand research in newborn screening" and "maintain a central clearinghouse of current information on newborn screening... ensuring that the clearinghouse is available on the Internet and is updated at least quarterly". Sections of the bill also make it clear that DNA may be used in genetic experiments and tests. Read the full bill: http://www.govtrack.us/congress/bill.xpd?bill=s110-1858 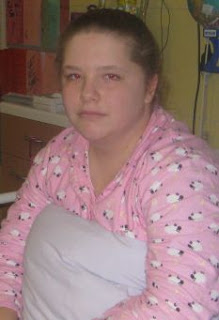 from times online: A 12-year-old schoolgirl has been left paralysed from the waist down by a mystery illness that came on 30 minutes after she was given the new anticervical cancer jab. Ashleigh Cave suffered dizziness and headaches soon after the vaccination at her school and then deteriorated rapidly, collapsing several times over the following days. A week later she was admitted to hospital after losing all strength in her legs and, two months on, there has been no improvement. Her mother Cheryl, 37, from Aintree, Merseyside, is blaming her daughter’s condition on the human papillomavirus (HPV) jab, which was introduced in Britain in September as part of a government-funded vaccination programme... In America, where an immunisation programme using a similar product, Gardasil, began more than a year earlier, there have been dozens of serious “adverse events” reported in which a link to the vaccinations is suspected.

video: sorting sellafield: inventions aid nuclear clean-up
from bbc: Sellafield's reactors and reprocessing bunkers are being decommissioned six decades after the plant began life. It made plutonium for nuclear weapons and generated electricity for the national grid. The Nuclear Research Laboratory's Fiona Rayment gives a guided tour of the plant's new research centre. The lab has been designed to reinvigorate the UK's nuclear industry amid a review of how much electricity should be developed by nuclear power stations.

scientists call ap report on global warming 'hysteria'
from fox news: Scientists skeptical of the assertion that climate change is the result of man's activites are criticizing a recent Associated Press report on global warming, calling it "irrational hysteria," "horrifically bad" and "incredibly biased." They say the report, which was published on Monday, contained sweeping scientific errors and was a one-sided portrayal of a complicated issue. "If the issues weren't so serious and the ramifications so profound, I would have to laugh at it," said David Deming, a geology professor at the University of Oklahoma who has been critical of media reporting on the climate change issue. In the article, Obama Left with Little Time to Curb Global Warming, AP Science Writer Seth Borenstein wrote that global warming is "a ticking time bomb that President-elect Barack Obama can't avoid," and that "global warming is accelerating." Deming, in an interview, took issue with Borenstein's characterization of a problem he says doesn't exist. "He says global warming is accelerating. Not only is it continuing, it's accelerating, and whether it's continuing that was completely beyond the evidence," Deming told FOXNews.com. "The mean global temperature, at least as measured by satellite, is now the same as it was in the year 1980. In the last couple of years sea level has stopped rising. Hurricane and cyclone activity in the northern hemisphere is at a 24-year low and sea ice globally is also the same as it was in 1980." Deming said the article is further evidence of the media's decision to talk about global warming as fact, despite what he says is a lack of evidence.

1st US face transplant done in ohio
from washington times: A woman so horribly disfigured she was willing to risk her life to do something about it has undergone the first near-total face transplant in the U.S., the Cleveland Clinic announced Tuesday. Reconstructive surgeon Dr. Maria Siemionow and a team of other specialists replaced 80 percent of the woman's face with that of a female cadaver a couple of weeks ago in a bold and controversial operation certain to stoke the debate over the ethics of such surgery. The patient's name and age were not released, and the hospital said her family wanted the reason for her transplant to remain confidential. The hospital plans a news conference Wednesday and would not give details until then. The transplant was the fourth worldwide; two have been done in France, and one was performed in China.

study: US media keeps people uneducated about health issues
from alternet: "Blaming the media" is a catchphrase that is used in almost cliché-level proportions. But when it comes to health care, a new study indicates it may be appropriate to fault media coverage for a lack of public knowledge about health care policy -- and by extension, the false perception of reproductive rights as ideological "hot rods" rather than women's health concerns. A recently released Pew Research study conducted with the Kaiser Family Foundation monitored health coverage from January 2007 to June 2008 to determine which subjects got the most coverage, and in which media. The study was designed to be particularly broad-ranging -- rather than, for instance, analyzing how TV news covers breast cancer, the study looked at how television, radio, print, online outlets and other forms of media covered everything heath-related, from specific diseases to health policy and more. What were the results? According to the report, "News about health occupies a relatively small amount of American news coverage across all platforms: 3.6 percent of news during 2007 and the first half of 2008." In a list of most frequently covered topics, health came in eighth -- far above religion, education and celebrities, but below the economy, crime, foreign affairs and politics. These results, while hardly thrilling, don't seem abysmal at first. Health gets more coverage than celebrities, after all, which seems like a victory in our current climate. But compounding the small amount of attention devoted to health, the breakdown within existing health coverage shows a tendency to focus on controversial or sensational aspects of health issues, leaving vital policy information behind. One need only to think about the extreme health stories on the nightly news (Are your pills contaminated? Are your children at risk from a rare strain of X?) to understand the crux of the problem. Why focus on the actual public ramifications of various diseases and policies when Jenny McCarthy and Amanda Peet are going at it over autism? Or we can lure people in front of the TV by frightening them?