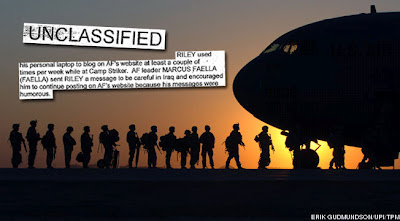 from columbiatribune.com: A former Missouri National Guardsman provided combat training to a white supremacist group whose members were preparing for an expected race war, a recently released court document shows.

The court document detailing Spc. Ryan Riley's role in the American Front was made public in a Florida state court proceeding regarding charges filed in May against group members. Riley, whose enlistment ended in May, hasn't been charged. But other members of the group are charged with hate crimes and conspiracy, as well as paramilitary training in furtherance of a civil disorder.

The court document shows that in July 2011, Riley, 28, went to Florida and trained American Front members on the AK-47 assault rifle and fighting techniques, the St. Louis Post-Dispatch reported. Afterward, the group gave him a patch, a sign of membership, according to the document.

Guard spokeswoman Maj. Tammy Spicer said an investigation into the allegations had been conducted but its results weren't being made public because it dealt with personnel matters.