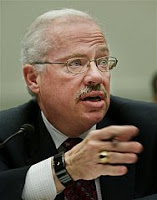 from abc news: A former Georgia congressman who helped spark President Clinton’s impeachment has quit the Republican Party to become a Libertarian, saying he is disillusioned with the GOP on issues such as spending and privacy.

Bob Barr, who served eight years as a Republican congressman before losing his seat in 2002, announced Friday that he is now a “proud, card-carrying Libertarian.” And he encouraged others to join him.

“It’s something that’s been bothering me for quite some time, the direction in which the party has been going more and more toward big government and disregard toward privacy and civil liberties,” said Barr, 58, a lawyer and consultant living in Atlanta.
“In terms of where the country needs to be going to get back to our constitutional roots … I’ve come to the conclusion that the only way to do that is to work with a party that practices what it preaches, and that is the Libertarian Party.”

Barr said he has no plans to run for office. In his new role as the Libertarian Party’s regional representative for the South, he will help promote the party’s message and recruit candidates, he said.

Barr helped manage the House Republicans’ impeachment case before the Senate in 1999.