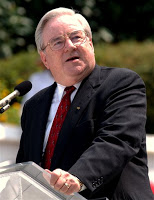 update from raw story: Fundamentalist pastor and televangelist Jerry Falwell was found unconscious in his office today and rushed to a hospital in Lynchburg, Virginia, but later died, according to various media reports.

from cbs: The Rev. Jerry Falwell was hospitalized in "gravely serious" condition Tuesday after being found unconscious in his office Tuesday, a Liberty University executive said.

Falwell, a television evangelist who founded the Moral Majority, became the face of the religious right in the 1980s. He later became president of the conservative Liberty University. Falwell was hospitalized twice in early 2005 for heart and lung problems.

update: When asked if he believes Falwell is in heaven,
Christopher Hitchens responds,
"No. And I think it's a pity there isn't a hell for him to go to."