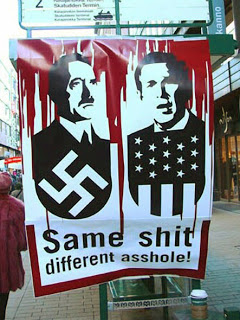 From Hitler to Pinochet and beyond, history shows there are certain steps that any would-be dictator must take to destroy constitutional freedoms. And... George Bush and his administration seem to be taking them all

from guardian: If you look at history, you can see that there is essentially a blueprint for turning an open society into a dictatorship. That blueprint has been used again and again in more and less bloody, more and less terrifying ways. But it is always effective. It is very difficult and arduous to create and sustain a democracy - but history shows that closing one down is much simpler. You simply have to be willing to take the 10 steps.

As difficult as this is to contemplate, it is clear, if you are willing to look, that each of these 10 steps has already been initiated today in the United States by the Bush administration...

4. Set up an internal surveillance system

6. Engage in arbitrary detention and release

10. Suspend the rule of law

"The accumulation of all powers, legislative, executive, and judiciary, in the same hands ... is the definition of tyranny," wrote James Madison. We still have the choice to stop going down this road; we can stand our ground and fight for our nation, and take up the banner the founders asked us to carry.