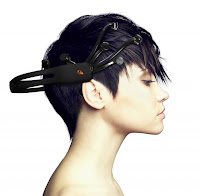 from stratrisks.com: It should be fairly obvious why, all technological considerations aside, there has been much more research into letting machines extract our thoughts, rather than insert them. Mind reading is a scary-enough concept all on its own — but mindwriting? It calls to mind the hacker deities of cyber punk novels; skinny, trench-swathed Neos projecting e-thoughts into the skulls of passing civilians. With such basic issues of privacy on the line, it took the trusting relationship between UK scientist Christopher James and his adventurous young daughter to give us our first stab at developing real telepathic, brain-to-brain communication technology.

James’ process of telepathic communication is rough, its results shaky, but the principle of brain-to-brain (B2B) communication is unquestionably met. It begins with the by-now standard collection of mental information, achieved in this case with electrodes placed against the skull. “I only used scalp electrodes on my daughter, since my wife wouldn’t let me drill holes in my daughter’s head,” James told the Times of India.

In the experiment, the sender imagined a series of binary digits, broadcasting their choices by imagining movement in their right arm or their left. The resulting patterns of brain activity were recorded and expressed by an LED — one frequency to represent a one, another to represent a zero. The patterns are simply too arcane to be useful to the conscious mind, too quick and complex, but they’re not meant to be read like Morse code, in any case.

When the LED signal travels to the recipient, it flashes into a very specific part of the eye (which part doesn’t matter much) and so the resulting optical signal is sent to a predictable section of the visual cortex. Surface electrodes just like those that originally recorded the signal are much better than people at making sense of the quick-flash LED language, seeing in the recipient’s brain more data than does the recipient themselves.

Once the pattern has been reverse-engineered from LED back to arm-waving, the telepathic process is said to have concluded. “The key idea to grasp,” said Dr. James, “is that a person’s eyes cannot distinguish between the different frequencies of flashing lights but a part of his brain, [the] visual cortex, can.”