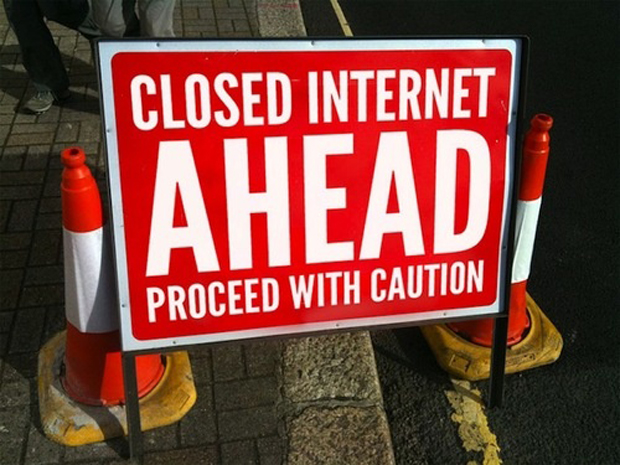 from washingtonpost.com: The Federal Communications Commission on Thursday voted in favor of advancing a proposal that could dramatically reshape the way consumers experience the Internet, opening the possibility of Internet service providers charging Web sites for higher-quality delivery of their content to American consumers.

The plan, approved in a three-to-two vote along party lines, could unleash a new economy on the Web where an Internet service provider such as Verizon would charge a Web site such as Netflix for faster video streaming. The proposal would, though, prohibit telecom firms from outright blocking Web sites.

The plan is not a final rule, but the vote on Thursday is a significant step forward on a controversial idea that has invited fierce opposition from consumer advocates, Silicon Valley heavyweights, and Democratic lawmakers. The FCC will now open the proposal to a total 120 days of public comment. Final rules, aimed for the end of the year, could be rewritten after the agency reviews the public comments.

Critics of the plan, as it stands now, worry that it would mark the end of net neutrality, the principle that says that all content online should be treated equally by Internet service providers.

After weeks of public outcry over the proposal, FCC Chairman Tom Wheeler said the agency would not allow for unfair, or "commercially unreasonable," business practices. He wouldn't accept, for instance, practices that leave a consumer with slower downloads of some Web sites than what the consumer paid for from their Internet service provider.

Wheeler moved forward with a proposal that could allow new business arrangements between Internet service providers--such as AT&T, Verizon and Time Warner Cable--and Web content providers, such as Facebook, Google and online startups for preferential treatment online. But he also asked whether such deals should be banned outright.

"There is one Internet. It must be fast, it must be robust, and it must be open," Wheeler said. "The prospect of a gatekeeper choosing winners and losers on the Internet is unacceptable."

The prospect of telecom companies cutting deals with content providers has drawn fierce criticism from investors, startups and big Silicon Valley firms. They say smaller companies that can’t afford to pay for faster delivery would likely face additional obstacles against bigger rivals. And consumers could see a trickle-down effect of higher prices as Web sites try to pass along new costs of doing business with Internet service providers.

Even one of the Democratic commissioners who voted yes on Thursday expressed some misgivings about how the proposal had been handled.

“I would have done this differently. I would have taken the time to consider the future,” said Democratic Commissioner Jessica Rosenworcel, who said the proposal can’t allow for clear fast lanes for the most privileged companies. She said she supported a proposal allowing the agency to consider questions on how it could prevent certain Web sites from being blocked, in addition to figuring out the overall oversight of broadband Internet providers.

“I believe the process that got us to rulemaking today was flawed,” she said. “I would have preferred a delay.”

Democratic Commissioner Clyburn said she also had concerns with the proposal but after a federal appeals court in January struck down the FCC’s previous attempt to implement net neutrality rules, she felt the urgency to approve baseline rules that prevent the blocking of Web sites.

Wheeler sought to defend his plan, stressing that consumers would be guaranteed a baseline of service and that the agency would beef up enforcement of companies that strike deals that are harmful for consumers or anti-competitive. The agency is considering the appointment of an ombudsman to oversee the broadband Internet industry, saying it would watch for abuse on a case-by-case basis.
“If a network operator slowed the speed of service below that which the consumer bought, it would be commercially unreasonable and therefore prohibited,” Wheeler said. “If the network operator blocked access to lawful content, it would violate our no-blocking rule and therefore be doubly prohibited.”

He did not supply many examples of what a “commercially reasonable” practice would be, which could leave room for interpretation.

But some consumer advocates doubt the FCC can effectively enforce anti-competitive practices or ensure consumers aren’t stuck with fewer choices or poorer service. They note that the FCC will only investigate complaints brought to them, and many small companies and consumers don’t have resources to alert the agency.

“No one really knows what the commercially reasonable test would look like,” said Gabe Rottman, policy advisor at the ACLU. “Even if the current Commission is acting in good faith, and we have no reason to think it is not, a vague totality test always raises the possibility of misuse.”

One idea that consumer groups applauded was on the open question of whether the government should redefine broadband Internet as a public utility, like phone service, which would come with much more oversight from the FCC.

Treating broadband as a utility would “reverse years of settled precedent, dry up investment in broadband deployment and network upgrades, and result in protracted litigation and marketplace uncertainty,” said Michael Powell, president of the National Cable & Telecommunications Association, and former head of the FCC, in a statement.

The FCC’s proposal has sparked a massive fight between two of the most powerful industries in the country — on one side, Silicon Valley, and on the other, companies such as Verizon and AT&T that built the pipes delivering Web content to consumers’ homes. The telecom companies argue that without being able to charge tech firms for higher-speed connections, they will be unable to invest in faster connections for consumers.