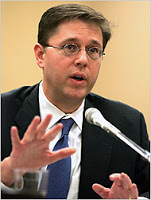 from nytimes: The head of the Federal Communications Commission has circulated an ambitious plan to relax the decades-old media ownership rules, including repealing a rule that forbids a company to own both a newspaper and a television or radio station in the same city.

Kevin J. Martin, chairman of the commission, wants to repeal the rule in the next two months - a plan that, if successful, would be a big victory for some executives of media conglomerates.

Among them are Samuel Zell, the Chicago investor who is seeking to complete a buyout of the Tribune Company, and Rupert Murdoch, who has lobbied against the rule for years so that he can continue controlling both The New York Post and a Fox television station in New York.