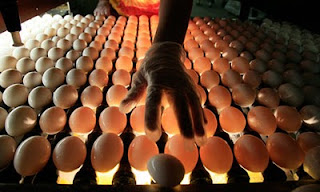 from natural news: Amid the massive egg recall currently underway over potential salmonella poisoning, the U.S. Food and Drug Administration (FDA) has been working hard to push its pasteurization agenda. The agency recently made an announcement recommending that all grocery stores and restaurants begin stocking pasteurized eggs instead of raw ones.

According to the U.S. Centers for Disease Control and Prevention (CDC), the number of salmonella cases being reported has been steadily increasing throughout the summer. Rather than the average 50 illnesses reported each week, June and July saw numbers as high as 200 per week, prompting a response from the FDA.

However, in typical FDA fashion, the agency has decided to ignore the actual cause of illness and contamination - filthy, industrialized food production systems - and instead call for all eggs to be cooked before being sold to consumers.

Other recent outbreak scares include both spinach and tomato recalls, after which the FDA made similar recommendations urging produce irradiation as the solution. But this philosophy fails to address the real problem with the current food system.

The industrial food system is both unsustainable and unhealthy. Whether with animals or produce, the methods typically used to raise food commercially are toxic and unsanitary, and are actually responsible for causing food contamination. Animals and produce that are raised organically and naturally, the way nature intended, do not become contaminated with salmonella.

But none of this phases the nation's regulatory agencies, which continue to push for killing food rather than trying to clean up the system and fix the problem at the source.