from washington post: After years of aggressive lobbying by unhappy state governments, the administration chose to restore FEMA's power to coordinate federal disaster operations. That power was undermined in the administration's previous plan - used just once, after Katrina - when the secretary of homeland security appointed his own officer to oversee disaster response. Under the new plan, the head of FEMA will appoint the top coordinating officer, clarifying responsibility and, according to the states, ending confusion that caused critical delays. Congress ordered that change to the plan last year. 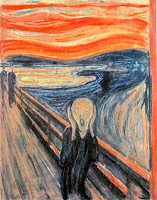 from danger room: American military researchers are working to uncover and harness the most terrifying chemical imaginable: that most primal odor, the scent of fear. Pheromones are chemicals released by animals as signals to their own kind: for sex, for territorial marking, and more. They're often detected in the olfactory membranes. But there's more to pheromones than attraction. Many animals have an alarm pheromone which is used to signal danger; aphids, for example, use it to cause their fellow lice to flee. Now, the US Army is trying to track down and harness people's smell of fear. The military has backed a study on the "Identification and Isolation of Human Alarm Pheromones," which "focused on the Preliminary Identification of Steroids of Interest in Human Fear Sweat."

from washington technology: The U.S. Joint Forces Command and Northern Command are planning a series of computer-based disaster drills with four states this year as part of their Noble Resolve 2008 preparedness exercises. The drills are intended to enhance military support during and after natural disasters, accidents and terrorist attacks. The participating states are Indiana, Oregon, Texas and Virginia.