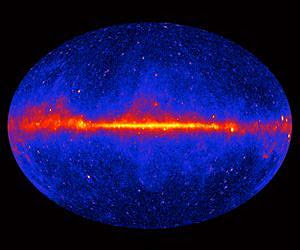 from spacedaily.com: Astronomers using data from NASA's Fermi Gamma-ray Space Telescope have made the most accurate measurement of starlight in the universe and used it to establish the total amount of light from all of the stars that have ever shone, accomplishing a primary mission goal.

"The optical and ultraviolet light from stars continues to travel throughout the universe even after the stars cease to shine, and this creates a fossil radiation field we can explore using gamma rays from distant sources," said lead scientist Marco Ajello, a postdoctoral researcher at the Kavli Institute for Particle Astrophysics and Cosmology at Stanford University in California and the Space Sciences Laboratory at the University of California at Berkeley.

Gamma rays are the most energetic form of light. Since Fermi's launch in 2008, its Large Area Telescope (LAT) observes the entire sky in high-energy gamma rays every three hours, creating the most detailed map of the universe ever known at these energies.