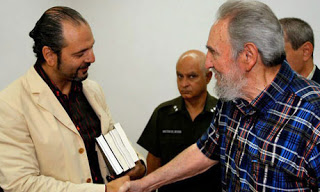 from guardian: Fidel Castro has more reason than most to believe conspiracy theories involving dark forces in Washington. After all, the CIA tried to blow his head off with an exploding cigar.

But the ageing Cuban revolutionary may have gone too far for all but the most ardent believer in the reach and competence of America's intelligence agency. He has claimed that Osama bin Laden is in the pay of the CIA and that President George Bush summoned up the al-Qaida leader whenever he needed to increase the fear quotient. The former Cuban president said he knows it because he has read WikiLeaks.

Castro told a visiting Lithuanian writer, who is known as a font of intriguing conspiracy theories about plots for world domination, that Bin Laden was working for the White House.

"Bush never lacked for Bin Laden's support. He was a subordinate," Castro said, according to the Communist party daily, Granma. "Any time Bush would stir up fear and make a big speech, Bin Laden would appear, threatening people with a story about what he was going to do."

He said that thousands of pages of American classified documents made public by WikiLeaks pointed to who the al-Qaida leader is really working for.

"Who showed that he [Bin Laden] is indeed a CIA agent was WikiLeaks. It proved it with documents," he said, but did not explain exactly how.

He made his comments during a meeting with Daniel Estulin, the author of three books about the secretive Bilderberg Club which includes men such as Henry Kissinger, the former US secretary of state, leading European officials and business executives. Estulin says that the club is form of secret world government, manipulating economies and political systems.

Estulin offered his own views on Bin Laden: that the man seen in videos since 9/11 is not him at all but a "bad actor".

However the two men did find something to disagree on. Estulin has long argued that the human race will need to find another planet to live on because of overcrowding. Castro was not keen. He observed that man had only made it to the moon, which is entirely unsuitable as a new home, and what lay beyond that was not much better. Better to fix things on earth. "Humanity ought to take care of itself if it wants to live thousands more years," he said.