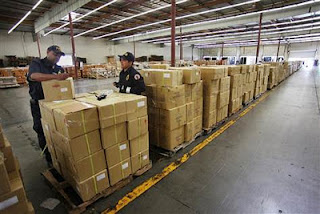 from news21: At a sprawling warehouse here, two investigators from the U. S. Food and Drug Administration watched intently as 50 boxes of preserved bean curd from China were emptied into a grinding machine. The monstrously loud apparatus worked its way through 1,800 glass bottles, grinding the glass and spewing out a stream of chunky yellow ooze that would be collected, treated and disposed of in the sewer system. FDA investigators had decided that the bottles of bean curds were improperly heat-sealed and, as a result, were susceptible to harmful bacteria like botulism, which can be fatal. The case of the destroyed bean curds was relatively straightforward: They had been flagged as suspect as soon as they arrived in port due to a defective heat seal and were sent directly to an FDA warehouse for testing. That’s not always how it happens.